We hope this finds you well! We can’t believe that yet another year has flown by! Here is a little note about what has been happening in The Guilder house in 2009…

Poppy's Health
Poppy’s scans showed cyst issues in January, putting her back onto 6-weekly scans & us in a worried state. However, from May onwards every scan has shown that both tumour & cyst are smaller! Therefore, Poppy is now only having 4-monthly scans & 4-monthly eye tests! The longest gap ever since her diagnosis way back in March 2004. Her next scan is January 18th.  This time, if all is well she’ll be moved to 6-monthly scans!!!! We are so lucky.
Poppy's Busy Life!
Poppy is now almost 7, doing very well & leading a full & happy life. At school, she is still above average, but does now have support as her concentration has suffered since radiotherapy. This has helped her to stay on task & make good progress. She has taken part in 3 dancing competitions this year, winning a gold & 3 silver medals for her solos! Amazing! She also took her first ballet exam & got Honours (85%). Her swimming lessons have also gone well this year, since May Poppy has earned her 5m, 10m, 15m, 25m & 50m badges!!! All for the little girl we were told would have serious learning difficulties & would never walk. We are extremely proud of her.
Fundraising
Our fundraising has continued to go well. Our ball in January raised £6000, our first ‘Sock it to ‘em!’ event linked with Sainsbury's Tamworth & involving schools wearing silly socks raised £2000 & an 80s/90s night at KUBE Tamworth raised £5000. These, along with various other sponsored events that people have kindly undertaken for ‘Poppy Fields’ have taken our total raised to a huge £102,000!!! WOW!!!
Supporting Others
This year, I have also set up a support group ‘Poppy Fields Special Mums & Dads’ with the help of my friend, Sarah. We meet twice a month, supporting parents of children with serious illnesses. We also have a support section on our updated ‘Poppy Fields’ website & a group on Facebook. Many families have contacted us, including one from Holland. We are so pleased to be able to help others through our experience with Poppy.
Very Exciting News!
Finally, after many failed fertility treatments, we decided against IVF treatment & accepted that Poppy would be an only child. However, we are now thrilled to announce that a miracle has happened & Poppy will be having a baby brother or sister naturally in June 2010!
Sending everyone lots of love at Christmas & best wishes for 2010. 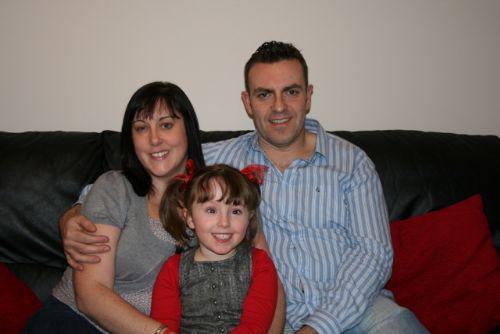 Thank you for your support this year,
Lisa, Brian & Poppy Guilder