Optic Chiasm Glioma Information
Optic gliomas are rare and the cause is unknown. These tumours occur most often as a slow-growing, benign form in children and almost always occur before the age of 20. Optic glioma represents approximately 5% of all brain tumours.

Poppy was diagnosed at just 14-months-old.

This is an actual MRI Scan taken from Poppy at diagnosis on March 17th 2004. The large white mass is her tumour. 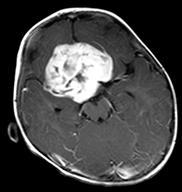 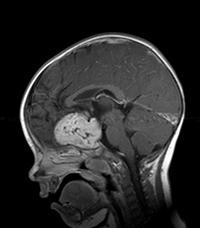 What is An Optic Chiasm Glioma?

A Glioma is a benign tumour of nerve tissue. A tumour is a condition where a part of the body grows more than it would normally. Benign means that bits of the tumour will not normally break off and spread to other parts of the body. It may, with time however grow and get bigger. The optic chiasm is made of nerve tissue.

These tumours are usually solid but may be cystic. Poppy’s tumour has a large cyst in the centre that has replaced the tumour that has been removed surgically or has shrunk through chemotherapy/radiotherapy.

In the case of optic gliomas that extend to the optic chiasm, 20% of patients demonstrate a more aggressive course. Poppy’s tumour followed a very aggressive course - this was not expected by her consultants.

How Does An Optic Chiasm Glioma Affect A Child’s Eyes?

Optic Chiasm Glioma may cause visual field loss, blurred vision and Nystagmus (in some children the eyes are always moving ‘to and fro’ even though the object that they are looking at is still - this ‘to and fro’ movement is called Nystagmus)

Optic Chiasm Tumours are benign. This means they do not normally spread and grow to other parts of the body. They can however slowly grow and become bigger. The Glioma can then press and squeeze parts of the brain near the chiasm. This can lead to other conditions also developing. These may include hydrocephalus, problems with growth and development and head bobbing.

What Can Be Done To Treat The Glioma?

Many children with Optic Chiasm Glioma do not need any treatment. This is because many Optic Chiasm Gliomas grow so slowly that they do not cause any further problems. Regular checks at the clinic and scans can help to see if the Glioma is getting any bigger.

If the Glioma is getting bigger and causing new problems then treatment may help. There are three kinds of treatment. Any decision on treatment is discussed fully with the child and their parents. Most treatments can have side effects. The benefit to the child must always be weighed against any possible damaging side effects of the treatment. Often X-ray treatment is recommended. This is called Radiotherapy. X-rays are normally used to take pictures of patient’s lungs and broken bones. When concentrated and focused on to a Glioma they can help slow down its growth. Poppy’s consultants managed to hold off radiotherapy until Poppy was 5 - there is now a high risk of damage to her brain & pituitary gland due to her age. She requires daily injections of growth hormones.


Sometimes drugs injected into a child's veins are also recommended - this is called chemotherapy. Poppy’s initial chemotherapy course was for 17 months - she had 3 drugs used in her treatment - Carboplatin, Vincristin & Etoposide. She then had a further 3 months on Vinblastine.

Very rarely a surgeon might try to remove some of the Glioma by an operation. The chiasm is very difficult to operate on. Other parts of the brain might be damaged during an operation. Sometimes vision can be worse after the operation than before. An operation is not recommended very often. Poppy underwent 2 surgeries within only 9 weeks of each other due to the size and aggressiveness of her tumour. 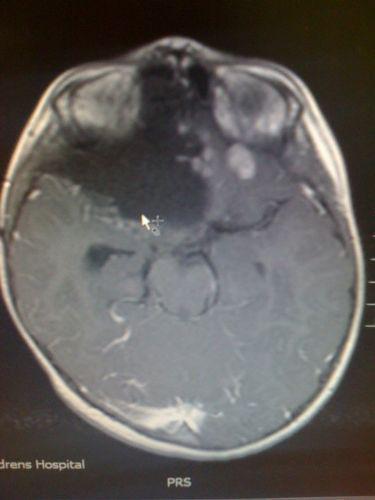 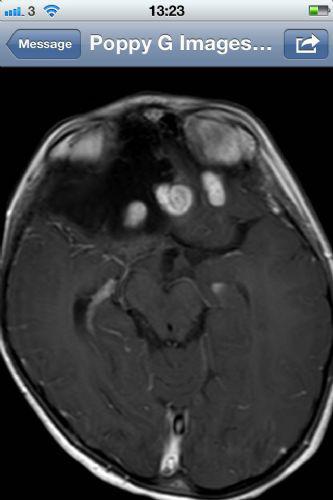 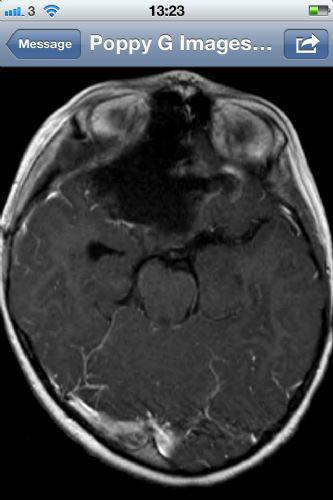 May 2015 - 3 small specks of tumour now present and active 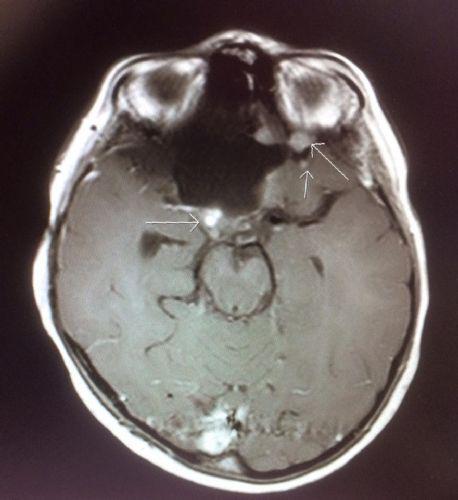