We met Mr. Sygouros the next morning at BCH. He explained that the only option was surgery as Poppy’s tumour was so big. He said he would not be able to remove it all & he couldn’t guarantee that we would get Poppy back as well as she was. I remember looking over at my happy, bouncy little girl as Brian asked what would happen if we decided against the operation. ‘She will be dead within months’ was the reply. So we asked about her chances of surviving the surgery – Mr Sygouros’ answer was ‘a toss of a coin, 50/50’. Our only choice was for her to have the operation on Monday 22nd March or Monday 29th March. After an hour of discussing we decided that we would give her until 29th March. Mr Sygouros felt that one week would not make any difference, but if we were going to lose Poppy that gave us 10 whole days with her first.

In those 10 days we crammed so much in, we took Poppy to the seaside, the airport, the zoo, the farm – everywhere. How do you cram a whole life into 10 days? Brian & me took it in turns to cry, if one was the low, the other was strong & vice versa. Looking back it seems strange that we never asked about tumour types, cancer or chemotherapy. I think we really didn’t understand this new world we had been thrown into. We also felt as if we were the only parents in the world going through this. We did not do any research on the Internet; I guess we were too scared to find out anything at that point, we just focussed on enjoying these 10 precious days with our beautiful baby girl.

During those 10 days Poppy had further scans & we also visited the Oncology Department at BCH. That was where we first realised that we were not the only ones. We met many other parents, laying down those foundations of mutual support that are still so strong today. I think meeting others also allowed us to believe that Poppy could survive this operation.

Poppy had 8 hours of brain surgery on Monday March 29th 2004. She went into theatre bouncing & waving ‘bye bye’, so trusting, as if we were taking her somewhere to play, at 10am in the morning.  At about 1pm, Bri was a being shown the parent accomodation in Edward House by a nurse, when he saw Mr. Sygouros on his mobile phone in a corridor. Mr. Sygouros saw Bri & said 'Oh, I was just calling you'. Bri said his immediate thought was 'they've lost her', but Mr. Sygouros said 'The operation is going well, the tumour is hard not soft, they are just cutting away at it now, Poppy is fine, she'll be in there another 5 hours or so. I've just nipped out for a sandwich!'. Bri said it certainly made him realise although Mr. Sygouros spends his days saving lives, it is just his job, all in a days work, amazing.

After 8 hours of crying, praying & hoping, Poppy came out of theatre at 6pm that night. When Mr Sygouros told us that she was crying & moving all of her limbs, I could have picked him up & hugged him. The feeling we experienced that day is one that you really cannot put into words. We were the luckiest people in the world.  Poppy looked like a puppet, with wires attached at every possible point, tubes every where, but she was alive, crying & moving. Mr. Sygouros popped along to see her later & asked if she could see, when we replied 'Yes', he said 'Phew!', the risks of Poppy going completely blind were enormous.

Scans the next day showed that around 60% of Poppy’s tumour was removed, we then had to wait until the Friday to find out the tumour type. Poppy’s recovery was remarkable. She was crawling up & down the ward attached to her drip within a couple of days. We met some very special families during that week, many of whom we are still close to now.

Poppy’s histology results showed that her tumour was low grade, an Optic Chiasm Glioma or Juvenile Polycytic Astrocytoma. Mr Grundy, Poppy’s then Oncologist, felt fairly confident that the tumour would remain stable & that she would only need MRI scans every 3 months. So, Poppy came home on Saturday 3rd April, her Daddy’s 34th birthday. That was the day we decided to start fundraising, as we knew that BCH had saved Poppy’s life & we knew what a fantastic hospital it was. At that point, we hoped to raise about £1000. We felt that we were such lucky parents, the luckiest in the world. 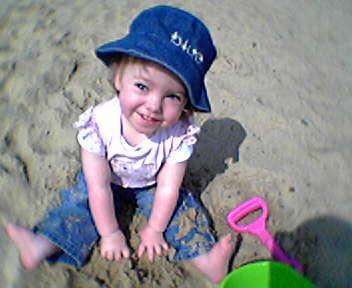