We spent many happy days at home during the next few weeks. Poppy’s recovery was amazing, apart from a lot of swelling, especially if she was excited or upset & CSF would form a huge lump where it had escaped through the hole in her skull. Poppy’s next scan was on Wednesday 19th May 2004, we were told the results would be in 2 weeks time.  However, on the Friday night of 21st May, Mr Grundy called us at home to say that almost all of the tumour had regrown & that Poppy would need another operation & then chemotherapy.

Poppy a few days before her 2nd surgery 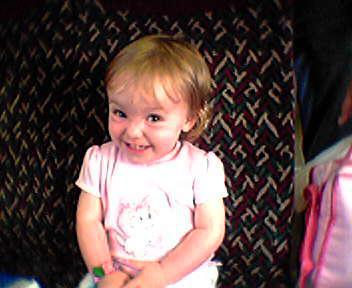 Poppy, now 17-months-old, underwent a 6-hour operation on June 9th 2004. Her survival odds were better, 90% this time, but the fear was still as awful. We had been advised that as the 2 major operations were only 9 weeks apart, Poppy would be very poorly this time & would need to go to Intensive Care. Mr. Sygouros’ walk towards us on the ward after Poppy’s operation that day was heavy & slow. He was very disappointed that he had only been able to remove 40% of the tumour as Poppy had bled so heavily, but she was moving all of her limbs. We were just so grateful that she had survived yet again. 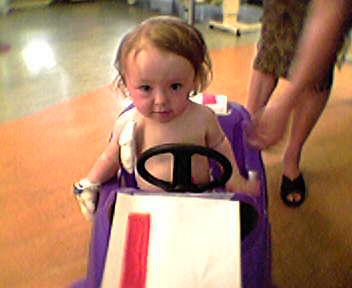 When we went down to see Poppy in the recovery room, we were expecting her to be asleep, very poorly, but she was sitting on a nurses lap crying, saying ‘Mommy tuddle (cuddle)’. What an amazing sight! Back on the ward, Poppy was still crying & asking for a drink. The nurses started off by giving her little sponges to suck on, but within 20 minutes she was drinking water from her bottle. Then Poppy started crying for toast. We all knew it was too soon, but an hour after surgery we gave in, deciding she may well be sick, but we could deal with it, the hunger was distressing her more. We will never forget the look on the Oncology Registrar’s face, the same one who earlier had told us Poppy would need to go to ICU, as he walked down the ward an hour after Poppy’s brain surgery to see her sat up, eating toast. His words were ‘Where am I? Holby City??’. And Poppy was not sick at all! Poppy is still remembered by many theatre staff now, for this amazing recovery! What an absolute star!!!

Poppy only 4 days after her 2nd surgery - truly amazing! 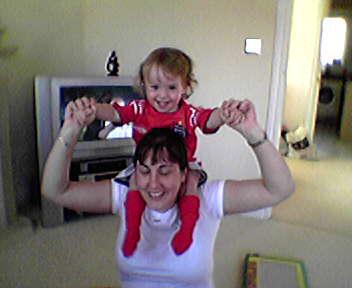 The next day, Mr Grundy, talked to us about chemotherapy. He explained that Poppy would need 2 drugs, Vincristin & Carboplatin, & that her treatment would start in a couple of weeks. So, we took our little girl home on her cousin Peter's birthday (only 4 days after her surgery this time) to recover & build her strength ready for her next battle.