After Poppy had her cyst drained, every 3-monthly scan showed change of some kind – the cyst was bigger & the tumour was bigger. Mr. Sygouros’ fears about the tumour re-growing were right. On January 29th 2008, Poppy started another course of chemotherapy. This time, the protocol was simply going to be Vinblastine every week for 18 months. Poppy had a new Vascuport inserted & once again chemo began.

Poppy on her 5th birthday - just before re-starting chemo 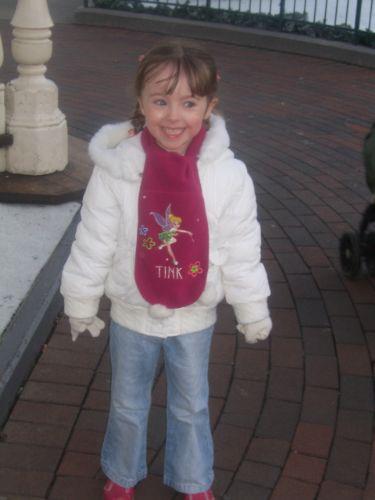 It was strange taking Poppy into the treatment room in Oncology Daycare, the room was the same, the staff were the same, Poppy’s play-therapist, Jenny, was the same, & yet Poppy had absolutely no recollection at all. It seemed strange that she could have had all of that previous treatment & not remember any of it, but it was a real blessing as it meant that Poppy also had no fear & that we were starting from scratch.

Poppy with her new port 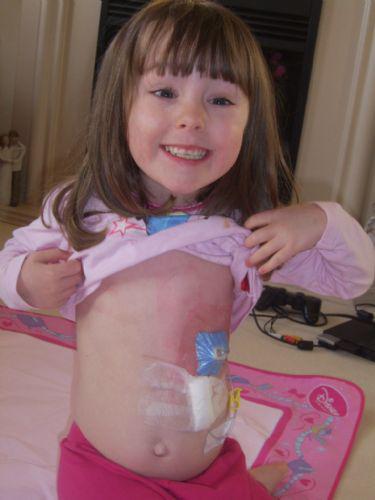 Poppy coped incredibly well with the weekly Vinblastine, just having Tuesday afternoons off school. I remember saying to my friend, Sarah, as we sat in clinic with Poppy & her daughter Abi, that Vinblastine was fab! I said Poppy hasn’t been sick, she hasn’t lost her hair (it did thin a little, but not noticeably) & she is just so well!! Looking back, perhaps I should have taken that as a sign that it wasn’t doing anything to the tumour either.

Poppy feeling poorly & being looked after by her kitten Ruby 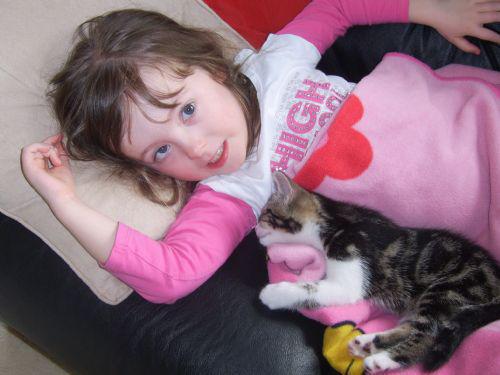 oppy had a scan in April 2008, after 3 months of Vinblastine, and the tumour had doubled. So now, we were yet again back in a horrible place. We knew that the risks of surgery again were so high, Poppy could not have her old chemo protocol, as she was allergic to Carboplatin, the only option left was radiotherapy. We had tried to hold this off forever, as we knew the risks were high & permanent, but we had now reached the point where that was our only option. 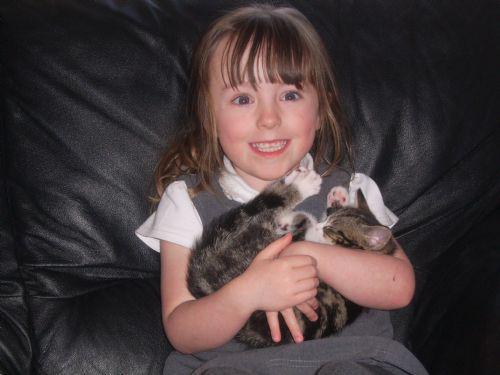