Before Poppy’s chemo started, we met again with Mr. Grundy. He explained that he had just returned from a Brain Tumour Conference in Boston. He said that new research showed that if they added Etoposide to Poppy’s chemo regime, she would have better odds of fighting her tumour. Evidence shows that Optic Chiasm Gliomas often behave more aggressively in younger children, Poppy’s had clearly followed this pattern. Mr. Grundy said that this chemo protocol had not been used at BCH before & that Poppy would be very ill, but we knew that it was her best chance. We now know how lucky we were that the new protocol had been discussed the week before Poppy started her chemo.

Poppy in isolation during chemotherapy 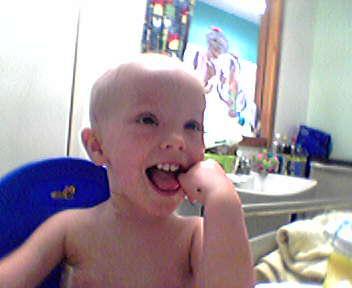 Poppy had her central line fitted on Friday 25th June 2004, her new ‘wigglies’ that would allow her chemo to be given. She then started chemo on Tuesday 29th June. The protocol was:

Taking us up to September 2004. After this heavy induction, Poppy would continue with:

This was to continue until January 2006.

Poppy was very ill initially, lots of infections & sickness, but in true Poppy-style she bounced back & soon took it all in her stride. Poppy having a temperature & being admitted to isolation became our new routine. A hospital bag was permanently packed. Poppy was usually home within 5 days, apart from one awful infection that hospitalised her for almost 3 weeks. We think her little body had just had enough at that point.

During this time, Poppy lost all of her hair, including her eyelashes & brows. She also had to have her Central Line replaced with a Vascuport (we asked for this instead of another central line) after the first line got caught under the drip stand while she was crawling & pulled out of her chest (a horrible moment that I blamed myself for & was in such a state that an anaesthetist was sent down to reassure me & calm me down). Poppy also developed a super bug in her tummy, called VRE, which meant that she had to be in isolation for every hospital stay during that time. Looking back, it was hard at times, but it really did become routine, like a special club that we were in. We made some fantastic friends with other families & the doctors & nurses & other staff at BCH.

Poppy in isolation with sepsis

During the chemo, Poppy’s tumour did shrink, which was amazing! It only happened once, a year into her treatment, every other scan was stable. We were thrilled. However, Poppy gradually became more allergic to Carboplatin, despite various attempts to stop this, & in October 2005 her reaction was serious enough for her chemo to be stopped. We had expected to plan a big end of chemo celebration, but because of the circumstances, it did not happen, I guess we were fearful that Poppy had not been able to complete her full course of chemo as planned. Poppy’s new consultant at that point was Dr Andrew Peet, as Mr Grundy had moved to the Queens Medical Centre in Nottingham.  Dr Peet reassured us that it was safe to now watch & wait with Poppy’s tumour. He was right, and Poppy remained stable until January 2007.