Poppy's Update February 2010
Hi All,
We hope this finds everyone well. Time seems to be racing away again, I can't believe it is almost the end of February already. Before we update you all, we would like to thank everyone for Poppy's Christmas & birthday presents...THANK YOU!!!
Poppy
Poppy celebrated her 7th birthday in January. Each birthday feels like a huge milestone, we feel blessed that Poppy is doing so well. March 17th this year will be 6 years since Poppy was diagnosed, we are so lucky to have our bright, smiling, cheeky little girl. Poppy continues to do well at school, dancing & swimming. She has an extremely strong personality that makes her full of character (and attitude at times!). Her last scan was January 18th & both tumour & cyst were stable. Poppy's growth/weight are now an issue though, so she will be having a test on March 8th to determine if she now needs to start growth hormones. We will get the results in April. We are expecting that this will be the case, as both the tumour & radiotherapy have damaged Poppy's pituitary gland & hypothalamus. Poppy will be taught to inject herself each day, but as her super brave friend Abi is already doing this, we know she'll be able to help Poppy too. 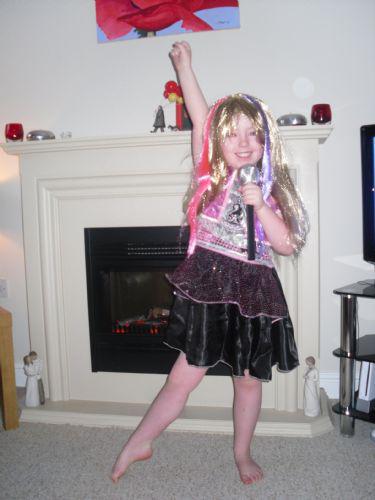 Poppy (AKA Hannah Montana!) on her 7th birthday
Miracles...
Optic Chiasm Gliomas are a rare brain tumour. They cannot usually be fully removed due to their location, and the aim is to shrink them or keep them stable through chemotherapy & radiotherapy. We know that Poppy will have tumour present for the rest of her life. However, what can only be described as a miracle has happened only 14 miles away from our home...
Liberty Rose is 3 years old, she was diagnosed with an optic chiasm glioma at only 8 months old. The same chemo regime that Poppy underwent was very hard on little Liberty's body, making her very ill, but she fought through & her tumour showed good shrinkage. She had been off chemo for 9 months when she had her last scan in January. Her lovely parents, Dawn & Carl, were hoping hard for stability of the remaining tumour. You can imagine their joy & shock when they were told it had disappeared!! WOW!!!  Nobody knows how or why, but little Liberty's body has fought off the remaining tumour by itself. This brings so much hope to families, like ours. We really wanted to share the amazing news! You can find Liberty's amazing story at the links below...
Never give up hope.
Fundraising
As always the support we receive is amazing. Some of the donations we have recently received are from Mandi & Melissa Rawlings who did a very brave sponsored shark dive, Tamworth Citizens Advice Bureau, Florendine Primary School, the family of Gladys Mortimer & more! Poppy was also invited by our local radio station Touch FM to choose 8 songs & record an interview (with us!) about her journey so far. Poppy was a little star & DJ Dave James did a fantastic (and very sensitive) job. People are so kind & generous. We are hoping to do another official presentation to BCH in April sometime as we have officially passed the £100,000 mark now - an achievement we are very proud of.
Sainsbury's Tamworth
Poppy felt like a true celebrity last week when she was asked to officially re-open Sainsbury's Tamworth after it's refurbishment. The staff there continue to fundraise for us as their chosen charity of the year. 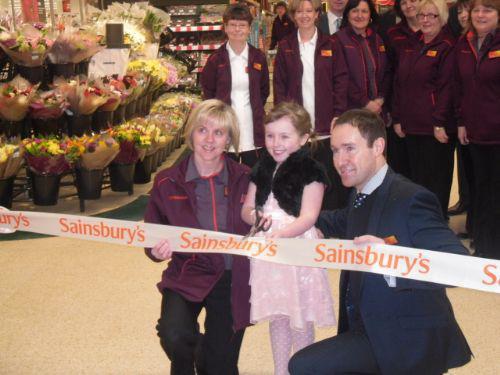 Here is Poppy in her official role!
Poppy Fields Ball 2010
There are still tickets left for our ball on Saturday 27th March 2010 at Drayton Manor. If you would like to join us please could you let us know ASAP, thank you. All details can be found on the Annual Ball section of this website.
Also, if you are able to donate a prize of any kind, we would be extremely grateful, thank you.
Poppy's Friends
Poppy's friends all continue to do well, but need your continued thoughts & prayers. We ask for prayers for Abi, George, Jasmine, Haydn, Mia, Hope, Alex, Liberty, Ashley, Jazmine & all of the special kids from our Optic Glioma Online support group & Facebook Oncology friends, Thank you.
Thank you all for your continued support, it means so much to us. I am now almost 25 weeks pregnant with a little sister (95% certain!) for a very excited Poppy!!!
Love to you all,
Lisa, Brian & Poppy Guilder 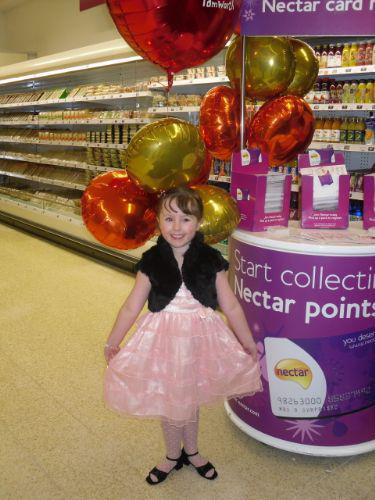