Poppy’s Update – Wonderful News
This is the news we never dreamed we would share…
Poppy’s tumour has all been successfully removed!!!!
At diagnosis in March 2004, Poppy’s tumour was huge. Surgery was the only option – but the risks of us losing our 14-month-old baby Poppy were 50/50. The surgery lasted 8 hours, 70% was removed. By June 2004 it was all back, the odds were slightly better for Poppy, but only 40% could be removed to keep her safe, so Poppy still had a huge mass in her head. Chemotherapy & radiotherapy over the years gradually broke the remaining tumour down into 3 small lumps. When these started to grow, they were finally accessible – amazing. Advances in neurosurgery also made this surgery much safer – there would be 2 neurosurgeons this time – Desi Rodriguez & Mr Walsh, there is a satnav system for the brain & through research things have dramatically improved over the years.
Poppy’s Surgery
The Plan…
Poppy was admitted on Sunday 22nd April – having been planned for 3 months, Poppy was very anxious, but so brave. One of her surgeons, Desi, looked at the MRI images with us – he said they felt they could easily get 2 bits of tumour, but the 3rd piece was tricky – they would decide during the operation if they would try to reach it. The fear was that Poppy has massive damage to the right side of her brain, if they damaged the left she would be left with learning difficulties. Also, Poppy has already lost the sight in her right eye, the left eye needed to be protected.
Desi said that as the tumour wasn’t putting Poppy’s life at risk, they would not put her at risk either (although death is always written as a risk on the surgery consent form). Surgery was expected to take 8 hours, we didn’t know if Poppy would have a full or partial craniotomy, bleeding in scar tissue (causing a stroke) was a concern, but Desi promised us that he would look after Poppy as if she was his own daughter…and we believed him.
The Operation…
Poppy had wonderful support from the Play Specialists at BCH, who had created a plan for Poppy & all of her doctors, so everyone knew her wishes. She was so very brave having her GA, that even the nurse who joined us cried. 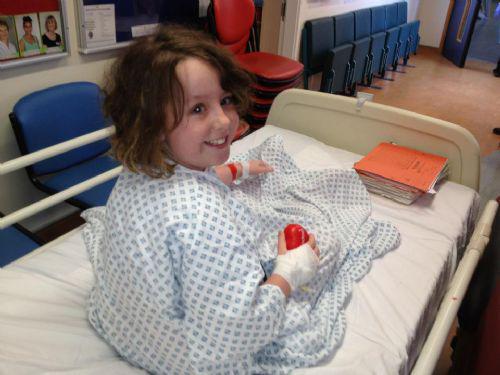 Poppy went into theatre at 9.20am, we expected her back at around 5pm. When we were told at 3pm that she was in recovery, we were relieved, but we guessed they’d had to stop early.  The nurse said Poppy was awake in recovery crying for us. We then saw Desi walking down the corridor – we asked if he’d had to stop early – he said ‘No, we got it all much easier than we thought’ – I burst into tears, hugged him & hugged Brian (making another nurse cry!!!) – unbelievable.
We went to see Poppy in recovery – she was distressed but asking to go home, she could move everything, talk & see. They explained that she had been given a new, expensive anaesthetic that only worked on her brain – so her heart & lungs hadn’t been interfered with, so she didn’t even need oxygen in recovery…phenomenal.
Poppy’s Recovery
Poppy was very poorly after her surgery this time. Muscle had been taken from her jaw to mend a tear in the lining of her brain (radiotherapy had made it stick to the skull), so she couldn’t talk or eat easily, she felt very sick & slept most of the time. She managed to walk on Wednesday morning, but it took her 24 hours to recover from doing that. The surgery had been in the area of your brain that controls emotions, so Poppy was very tearful & sad. By Thursday night she was really down, we said if you want to go home you’ve got to push yourself, we know it’s hard, but try to eat so your drip can go & you will feel better, you can do this Poppy! And she did!!! The drip came out later that night, the tight head bandages came off on Friday, the sparkle in Poppy’s eyes returned & Poppy came home on Saturday!!! Now Poppy needs to rest & heal, she is only on Calpol (!!!) but she has just had major brain surgery & a section of her skull removed – the bone will take a few weeks to fuse back together, and Poppy can hopefully return to school, swimming & dancing. 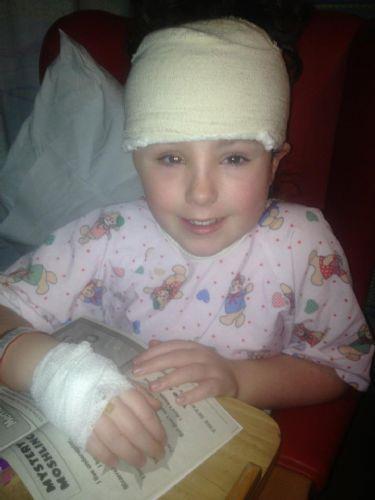 Thumping her Tumour
Poppy had asked if she would be allowed to see her tumour, as after 8 years of being annoying she wanted to tell it she hated it!!! In recovery, Desi brought the tumour to Poppy – he smacked the pot it was in & said it was a naughty tumour!!! On Tuesday he brought it to Poppy on the ward & told her to thump it!!! And she did J We thought it was amazing that they gave Poppy the chance to do that – that just shows you how wonderful BCH is!!! 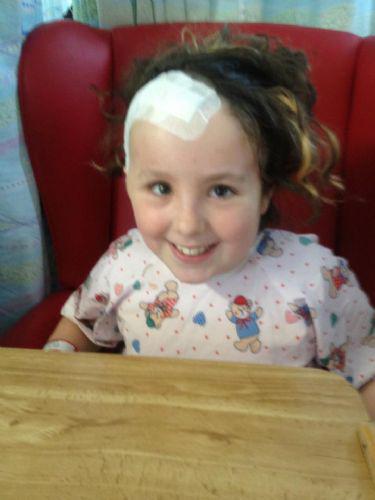 Next Steps
Poppy’s MRI scan showed that all of the tumour has gone (yay!!). One tiny slither of white is still enhancing – the team are not sure if it is a slither of tumour or not, but if it is it is so tiny, it will hopefully never cause issues again. We all agreed that the outcome was the best thing any of us could have hoped for. Poppy will be rescanned in 3 months. We are hoping that her scans continue to be so positive now & that the gap between them can be gradually longer. Poppy will start taking daily aspirin soon to prevent a stroke, she will continue with her daily growth hormone injections, her stress hormones & thyroid function will be closely monitored, as will her sight. We are not naïve enough to think that this is the end of Poppy’s brain tumour journey, but it is the best news we have ever been given since her diagnosis in 2004. Last night we opened the champagne J 8 years is a long time to be fighting a brain tumour…especially when you’re only 9, let’s hope Poppy’s fight is over.
Thank You…
As always, the care that Poppy has received at BCH has been outstanding – we would like to thank Desi Rodriguez, Mr Walsh & the surgical team, Dr Peet, the wonderful Ward 10 staff, the hospital chaplins, the play therapists & all at BCH who have played a part in Poppy’s latest surgery. We would also like to thank our amazing family, wonderful friends & everyone who has prayed, hoped, wished for this to happen. Thank you xxxx 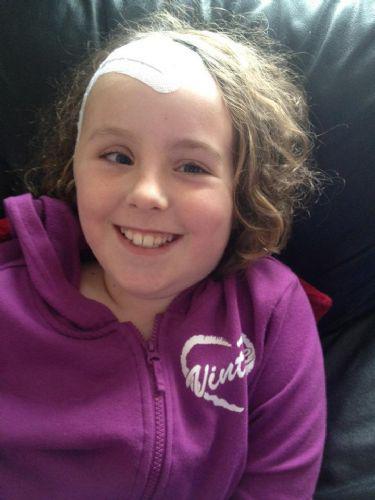 Finally – all our love to our friends whose children have lost their brave battles & those who are still fighting. Childhood cancer tears your world apart – together we need to keep fighting to make a difference – www.justgiving.com/poppyfields – thank you.
With love,
Lisa, Brian, Poppy & Lily Guilder